The client wanted the seams to stand out but did not like the look of flat felled seams.

Basically, I wanted about 1/4″ contrast of the faux suede on each side of the construction seam, with no topstitching (the horror of it, no topstitching).

The method I came up with was similar to adding piping, I cut the contrast fabric, twice the seam allowance plus the amount I wanted to show on the right side of the garment.

I sewed the contrast to the right side of fabrics, after I folded in half and pressed a crease line, and used that as stitch line.

Then folded the contrast toward the seam allowance, did to both pices of garment fabric.

Now the construction seam, took garment fabric and put right side together as usual and making sure to line up the stitch lines of the contrast fabrics.

This is where you can adjust the width of how much of the contrast fabric you want to show.  This example I wanted 1/4″ to show, so my construction seem is 1/4″ over from stitch line did earlier.  Leaving me with standard 5/8″ seam allowance,

If you want more to show, sitch 3/8″ over from stitch line and seam allowance would be 1/2″ 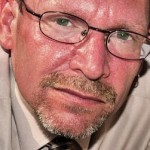